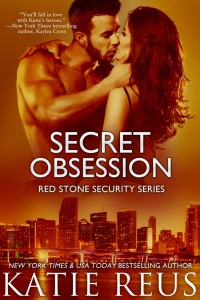 Since she moved to Miami, Raegan Taylor has desired Ford Burke–a sexy and rugged cop. He’s everything she’s ever wanted.  Unfortunately for Raegan, Ford’s kept his distance.  But when a night out goes extremely wrong, his protective instincts kick into high gear, and he finds himself fighting for her in more ways than one.

She’s exactly what he was trying to avoid.

Once Raegan and Ford grow closer, the harder they start to fall for each other.  But Ford’s past stirs up feelings he just can’t control, threatening to destroy everything they’ve worked for.  And when he screws up, he may lose more than just his one shot with her.

And now someone’s ready to ruin it all.

Someone wants Raegan—and if he can’t have her—nobody can.  He’s waiting.  He’s watching.  He’s lurking.  Ready to strike. He’ll make her his.  He’ll take down anyone who gets in his way—even a cop.

After a light knock she started to step into the office, but felt all the air rush out of her lungs when she saw that it wasn’t just Porter and Grant, but Ford Burke as well.

The sexy man made her feel like that naïve little farm girl she’d been trying to shed. Just looking at him turned her knees to mush. He was tall, with ridiculously broad shoulders she wanted to run her fingers over. He kept his dark hair closely cropped and had a neatly trimmed beard that on most guys she wouldn’t have liked. She’d never been a fan of facial hair until Ford. But she’d had a fantasy or two of what it would feel like to have his face buried between her—

She blinked when she realized they were all staring at her. She felt her cheeks heat up and wanted to kick her own butt. Raegan wasn’t sure if they’d said anything to her directly so, holding up the little gift bag, she said, “I brought this for Maddox.”

Just like that, Porter’s normally hard expression softened. “You spoil him,” he murmured, moving away from the desk, a grin on his face.

“Of course I do. I’m going to hold onto the title of favorite older cousin forever and I have no shame buying his love.” During her lunch break today she’d found a cute little boutique downtown and snagged an adorable Darth Vader pajama set. On the front of the shirt it said ‘Not Afraid of the Dark Side.’

Laughing, Porter kissed her forehead and pulled her into a light embrace. “You coming by for dinner tonight?”

“I can’t. Plans with the girls. It’s why I wanted to bring this to you now. But I’ll stop by tomorrow to see my little man.” She didn’t want kids of her own for years yet, but little Maddox had completely stolen her heart. He’d just turned one last month and was walking and babbling like a little maniac. And she loved spoiling him.

She was vaguely aware of Ford watching her, but of course he was—she’d interrupted them. She wished his focus was on her for other reasons.

“Where are you guys going tonight?” Grant asked and before she turned to face him she could hear the frown in his voice.

“None of your business,” she said cheekily, giving him a frown of her own when she saw the plethora of weapons on Porter’s desk. “What the heck is this? Are you guys starting your own army?”

To her surprise, Grant’s cheeks flushed the faintest shade of pink. “Maybe don’t say anything to Belle about this?”

Now that surprised Raegan. As far as she knew her cousins didn’t keep anything from their wives. “Um, about what? Your new arsenal?” She eyed the guns again. They all looked really old.

He nodded at Ford. “They’re antiques and Ford’s helping me refurbish them.”

Raegan smiled at Ford, murmured “Hi,” and he just nodded, his expression the same as it always was. Brooding.

Grant just continued. “Once they’re in good shape they’ll be worth a lot but…”

“Belle gets annoyed with too many guns around the house?” Raegan guessed. She’d grown up on a farm so she was no stranger to guns, especially not rifles, but she’d seen how some of the guys at Red Stone acted around their guns. They might as well stroke them and start calling them ‘my precious.’

“Yeah and she’s really emotional right now and wanted me to get rid of all my guns so I’m waiting to tell her about this…” He trailed off, shrugging.

Raegan pulled him into a big hug. “Congrats! How far along is she?” she asked, stepping back.

“About four months. We wanted to wait until she was a little past the first trimester, but we were going to announce it next week.”

“Thanks.” He grinned in a way she’d never seen. A mix of pride and a little bit of terror. Which was just way too adorable.

She heard her phone buzz in her purse, knew it would be Dominique telling her to hurry up. A relief, since it would get her out of here and away from Ford’s penetrating gaze. “I’ve gotta run, but can I call Belle and congratulate her?”

“Yeah, of course. Why don’t you come over for dinner Sunday? Her mom gave us a couple casseroles,” he tacked on when she would have automatically asked if he was cooking or Belle was.

“I’ll be there.” After giving her two cousins another quick hug, she nodded once at Ford, who’d been quiet as usual. “Nice to see you again, Ford.”

He just watched her with that brooding stare he seemed to have down pat, and made a sort of grunting sound that could have meant any number of things. And damn it, she kinda liked it.