Running From the Past 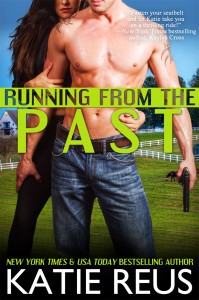 A woman on the run.

Miami socialite Emma Garcia has been running from who she is her entire life. When she witnesses a horrific crime, she goes on the run. In desperation, she answers an ad for a chef on a remote horse farm in the middle of nowhere, Florida. It seems like the perfect plan until she figures out what to do with her secrets. The only thing she doesn’t count on is being attracted to the rugged cowboy who owns the place. Whenever he comes around the only thing she can focus on is his seductive voice and sinful body.

And her past is about to catch up with her.

Former Marine Caleb Ryder hires Emma even though he knows she’s lying about her identity. He desperately needs the help, but he also doesn’t have the heart to turn away a woman so obviously in need. After being burned by a woman once, he doesn’t let that deter his mission to claim Emma’s body and heart. Now that she’s his, he’ll face any threat to protect her, no matter how deadly.

NOTE: This was originally published in 2008 by another publisher. It has a new cover, a new ISBN, and has been revised and edited.

He let out a bark of laughter. Normally he’d do a more extensive interview but what choice did he have? It wasn’t as if people were lining up for the position and he was afraid his men would mutiny if they had to suffer through another night of his cooking. “All right, I’ll have to do a background check, show you the kitchen to see if you think you can handle it, then—”

“No.” She crossed her arms over her chest and set her jaw.

“No background checks. I’m not giving you my social security number.”

He stood there quietly, watching her, trying to figure out what was going on in that pretty head. Desperation and defiance were an odd mix but the emotions played across her upturned face in equal measures. Caleb knew he should just tell her to turn around and leave but something in her deep brown eyes called to his protective nature. Something primitive and unfamiliar inside him stirred. “Why?”

She swallowed but instead of turning and running as expected, she answered. “I just broke off an engagement with someone and my family is less than thrilled with me. I need space and I need to make it on my own without my family butting in.”

After twelve years as a Marine Corps scout sniper, he was better than most at reading people’s faces. If there was one thing he knew, it was if someone wasn’t being straight with him. Her story was good and she obviously thought quickly on her feet but it was a lie. He’d let it slide. For now. “Then why can’t I do a background check?”

“If you run my number, my family will find me.”

Her face paled and something flared in her eyes. Something he’d seen on the battlefield more times than he could count. Fear. Real, unabashed, almost tangible terror. “They just would. Trust me,” she muttered and shifted her feet again.

He didn’t respond, forcing her to break the silence. “I know you haven’t had any responses to your ad…”

“How the fu— how do you know that?” he demanded.

A pinkish tinge of color ran across her high, exotic cheekbones. “Alice Delaney told me you were looking for someone and she also said you were the worst cook south of the Mason-Dixon line. So I know you need someone badly and I need a job. Maybe we can strike a deal. I cook for a week and if you’re not satisfied, I leave. You don’t even have to pay me.”

Her mouth snapped shut as if she knew she was rambling and those damn expressive eyes widened expectantly, luring him in. Oh she was trouble all right. No doubt about it.

Caleb was going to tell her to leave. It was on the tip of his tongue. How could he hire someone without any references? And Alice, the owner of Delaney’s Bed and Breakfast, didn’t exactly count. She was close to a hundred and trusted everyone.

All his experience told him this would pan out badly but he wasn’t thinking with his head. No, he was thinking with a much lower part of his anatomy. The part that wondered what was underneath that formfitting sweater. Her breasts were small, just like the rest of her but he’d bet anything she had perfect, pink nipples. Perfect for sucking and kissing. “When can you start?”