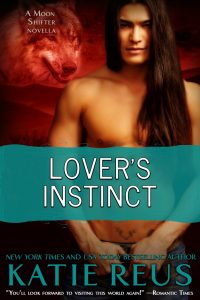 This alpha shifter is ready to stake his claim…

Lupine shifter Nikan Lawless has it bad for Esperanze Cordona, the sweet and curvy female who only views him as a friend. Lately, however, he’s started to see sparks of interest. So when he’s assigned to act as her bodyguard during a weekend education conference, he knows it’s the perfect opportunity to seduce her out of the friend zone—away from the prying eyes of their pack.

To put his plan into motion, Nikan cancels one of their hotel rooms. Is it underhanded? Yes. But he’s playing for keeps with this female. When a dangerous man from Esperanze’s past shows up in need of help, Nikan must shield her from a group of rogue shifters and convince her that they’re destined to be mates. Since she’s a beta and he’s an alpha she’s afraid things will never work between them. But he knows they’re meant to be together and he’ll do what it takes to make her his forever.

Esperanze Cordona rolled her suitcase to the front door of the house she shared with her four—three—sisters. For a moment her breath caught in her throat as that familiar pain lanced through her heart. She still couldn’t believe Alicia was gone. Didn’t know if she’d ever get used to it. Part of her felt guilty for leaving her siblings so soon after their youngest sister’s death, but she needed to get out of the house and away from her entire pack.

Just for the weekend. One of her former professors was giving a lecture in DC and she hadn’t seen him in close to thirty years—since before shifters and other paranormal beings had come out to the world two decades ago—so this was the perfect opportunity. While she respected his work and wanted to see him, the truth was, she just needed to get away from the ranch. Maybe it would dull her pain.

As she opened the front door, she immediately smiled. Pain from thoughts of her dead sister lingered in her heart, but seeing Nikan Lawless on her doorstep soothed some of it. From the moment they’d become friends, she’d noticed his calming effect on everyone, herself included. The tall, dark-haired, bronze skinned shifter might be part of the warrior class, but he was incredibly laid-back.

Thanks to his Native American roots, the sharp planes of his face and high cheekbones would make him an artist’s dream. She dabbled in photography and was working her way up to asking him if she could photograph him. Every day for the past few weeks she’d found herself looking forward to their nightly walks and conversation, but hadn’t found the right moment. “Hey, you caught me on my way out.”

“I know. I’m going with you.” His deep voice was so unique she’d be able to pick it out of a crowd of thousands.

She blinked, sure she’d misheard him. She’d just seen him last night and he hadn’t said anything. “What? Why?”

A casual shrug of those incredibly broad shoulders. “Connor’s orders.”

“I don’t understand. The pack can’t afford to lose you for the weekend.” Over the past few months their pack had undergone some serious changes and threats from outsiders. Before Connor and his small, all male pack of warriors had united with theirs, Esperanze’s pack had lost almost two dozen members, including all the males, to poisoning. That combined with a human element known as the Antiparanormal League who had been wreaking havoc on their pack meant her packmates needed all the security available at the ranch.

His full mouth quirked up at the corners, giving him what some females of the pack considered an irresistible quality. “I’m glad you think so much of my abilities, but they’ll survive without me.”

Rolling her eyes, she shook her head and pulled her suitcase out behind her before shutting the door. “It’s just a weekend trip. I’ll be fine by myself and I don’t need a babysitter.”

“Trust me, Essie, I don’t want to be your babysitter.” He often called her Essie instead of Esperanze and for some annoying reason it always made her heart beat just a little faster.

She wasn’t sure why the tall, broad shifter had befriended her, but she was glad he had. She hadn’t had many male friends who weren’t academics so it surprised her how much she and this warrior had in common. “Then tell Connor that. I’m sure if he hears it from you that you don’t want to go on this trip—”

“I never said that either.” He lifted her suitcase with the kind of ease that reminded her exactly how different they were.

Where she was a beta—one of the physically weakest of the pack—he was not only an alpha shifter in nature, he was a warrior, born to protect the pack. “So you want to go with me to DC?”

Instead of responding, he turned and strode across the yard toward the parking structure where most of the pack kept their vehicles. For a split second she contemplated arguing with him, but he had a stubborn look in his dark eyes that told her it would be pointless. Not to mention she loved his company. She followed him and slid into the passenger seat of his truck while he loaded her stuff into the extended cab. Before she could settle in, he’d opened her door and was strapping her in. The intimate way he leaned closer, brushing his chest against her breasts, stunned her.

She wanted to stop her physical reaction but couldn’t. Her heart rate increased as his spicy, sandalwood scent twined around her in an almost seductive embrace. Though she would never admit it, she’d had a couple fantasies about what it would be like to have his strong, muscular body naked and covering hers. Immediately she chastised herself. Nikan was her friend. Nothing more. She’d seen the way her female cousins looked at him. And they were all alphas, much more his type.

“For the record, I want to be anywhere you are,” he murmured in her ear, so close he might as well have run his tongue along it.