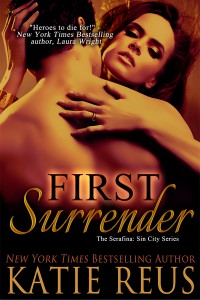 He’s dangerous, sexy, and everything she wants…

Sierra hit it off with Hayden from the moment they met. The dangerously sexy, tattooed ex-SEAL is one of the best friends she’s ever had—and the main star in her wildest fantasies. But he doesn’t see her that way. And she’d die of embarrassment if he found out she was still a virgin.

And he’s about to make his claim…

Hayden’s struggled to keep his attraction to the beautiful, dark haired casino chef a secret. He’s not good enough for her. But when an attacker targets Sierra, Hayden’s protective instincts go into overdrive. With the attraction between them burning out of control, he’ll do whatever it takes to protect her and convince her they’re meant to be together.

As the elevator dinged, announcing her arrival to the security floor, damn butterflies took flight in her stomach. It always happened when she was about to see Hayden and Sierra hated it. When she’d first met him, she thought he was a big jerk. A big, scary jerk. Okay, a sexy-as-hell jerk with tattooed sleeves covering both his arms. His tats added to that whole tall, dark and intimidating thing he had going on. As a former SEAL, Hayden certainly had the training for his current profession. But she’d come to learn that he was one of the sweetest men she’d ever known. For the last year they’d hung out constantly as friends and Thursday nights they had a standing ritual of dinner, drinks and sometimes she coerced him into going dancing with her and her friends. Usually he just stood guard by one of their tables and growled at any males who got too close. Which made her adore him even more.

God, she really was a masochist. Hayden was never going to be interested in her romantically but that didn’t stop her from wanting him more and more every day. Hayden could have any woman he wanted and she knew she didn’t fit the mold of his type. It was her freaking curse in life. Growing up and in college she had a lot of male friends because of her ‘friendly’ personality but she never dated any of them. One of her college friends had told her that she was way too ‘the girl next door type’, the type of girl you brought home to your mother—which was freaking annoying. She wanted to be the type of girl who got a man’s pulse pounding out of control. The kind who got him so hot and bothered that he couldn’t think straight. But not just any man. Only Hayden.

Her flat sandals snapped softly against the marble as she entered the security floor. A giant glass wall greeted her. Behind it she could see desks, and too many television screens to count. Some huge, some small, focused on dealers’ hands, patrons, the various bars and pretty much anywhere legal a camera could go. The array of them still astounded her. Stopping at one of the glass doors, she placed her hand on the biometric scanner. Once it scanned her palm, the door immediately opened with a whoosh. She had no business up here but about eight months ago Hayden had programmed her into the system so she wouldn’t have to bug him every Thursday. Sometimes she got off earlier than him and preferred to wait in the security room as opposed to the bar in her restaurant. She was there enough during the week; she didn’t want to hang out in her off time too.

Stepping inside she was inundated with noise and frantic chatter. Men and women were talking into their headsets, some clearly worried. There was normally a fast pace up here but today it seemed different.

Glancing around, Sierra didn’t see Hayden anywhere but assumed he was in his office. Before she’d taken two steps in that direction, Marty, one of the tech guys, jumped up from his desk when he saw her. “Hey, honey. What are you doing up here?”

She normally didn’t like nicknames but Marty called every female honey. She smiled. “Just stopping by to see if Hayden could sneak away early.”

Marty’s eyes widened slightly. “Oh…he’s not here. He said something about a date.”

A date? The word was like a punch to her gut. For a moment she was totally stunned, but she wasn’t going to show it in front of anyone, especially not a coworker. This place was worse than a middle school when it came to gossip. So she pasted on a smile. “Oh, right. He mentioned that, I totally forgot.”

Marty started to respond but Iris Christiansen strode through the glass doorway looking fierce in black pants, a crisp white button down shirt and a sleek, clearly custom-made black jacket. Everything about the other woman was, well, fierce. She was gorgeous but also a little scary, especially since Sierra knew the former Marine was always well-armed. The tall woman gave Marty one look and he scampered away.

Luckily she gave Sierra a bright smile. “What’s up, Sierra? You got a problem at the restaurant?”

Still struggling to find her voice, she shook her head. “No problem, just leaving. See you tomorrow.” Sierra tried to hurry away, but Iris followed her to the elevators.

Sierra swallowed hard. Lord, was she that transparent? “Just had a long day. Busy, you know?” Gah, why wouldn’t the elevator hurry up?

Iris raised a dark eyebrow. “Do I need to kick his ass?”

Staring at her, Sierra frowned. “What? Who?”

The mention of his name made Sierra’s stomach flip-flop. It also pissed her off. If he’d had a date he could have had the decency to tell her. Shrugging jerkily, she breathed out a sigh of relief when the elevator stopped and dinged. “Hayden hasn’t done anything.” And she wondered why Iris would assume this had anything to do with the man. It wasn’t like they were dating.

Iris didn’t respond, but her lips pulled into a thin line as the doors shut behind Sierra. Once she was alone, Sierra didn’t bother to keep up a happy face. Hayden hadn’t mentioned dating anyone in the past year, though she knew the man had to be dating. He was walking, talking sex appeal. Absently she rubbed the center of her chest. So, he was dating. No big deal. Right? Ugh, yeah right. Swallowing back the traitorous tears threatening to overwhelm her, she hurried into the below ground parking garage. Normally Hayden or someone else walked her to her vehicle but she didn’t want to bother asking anyone else. Not when she felt like crying. No way was she embarrassing herself and becoming a source of casino gossip.

Picking up her pace, her sandals slapped quickly across the concrete. As she reached the second row of cars, a tiny scream escaped her lips as a man wearing a mask jumped out from behind her Jeep. The guy was huge, maybe six feet tall, and when she saw the flash of metal—a knife!—in his hands, her chest constricted as a hundred horrible scenarios raced through her mind. Knowing she’d only get one chance she let out a blood-curdling scream at the top of her lungs as she backtracked and started running in the other direction.