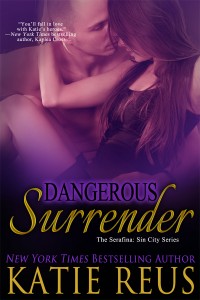 A cold-blooded killer wants her dead.

After her friend is murdered right before her eyes, Taylor uses her wits to escape with just a bullet wound, thankful to be alive. But now the killer isn’t the only one after her—the cops are, too, and Taylor’s not sure she can trust them—or anybody else in her life in California. She decides to turn to her old friend in Vegas, racing there with just the clothes on her back, only to arrive and realize he’s off on his honeymoon. Desperate, she breaks in and crashes.

A former Marine is determined to protect her.

When former Marine Roman MacNeil finds a gorgeous stranger unconscious and bleeding in his friend’s shower, his first thought is to help her . . . until she tries to knock him out with a vodka bottle. Lucky for Taylor, Roman isn’t a man who goes down easily. When he realizes the trouble she’s in, he’s determined to protect her—whatever it takes. As they’re thrust into a deadly situation they discover an attraction they never bargained for. But a determined killer is closing in, and time may be running out.

Roman scanned Vadim’s property as he pulled up behind an unfamiliar Pinto with a California plate. Frowning, he snapped a picture of the license plate before getting out of his truck. Vadim lived on the outskirts of town with no neighbors for miles. That car had definitely seen better days. Other than the unfamiliar vehicle, everything else looked normal. Just wide-open desert for miles around greeted him. There was no way in hell someone had accidentally stumbled on his place.

No one was supposed to be here. Hell, he hadn’t even planned on coming by. He’d just wanted to get one of Charlie’s favorite chew toys he’d forgotten the other day. He’d brought her by Vadim and Angel’s place a couple days ago because ‘Angel’ was worried about Charlie getting homesick while she and Vadim were on their honeymoon. In reality, Roman knew it was Vadim worried about the mutt. For such a hard ass, V had two soft spots: Angel and Charlie the German shepherd.

Withdrawing his weapon, Roman felt the hood of the Pinto with his free hand. The engine was cool. He ducked down and glanced under the partially open garage door to look inside.

No one was there and Vadim’s Mercedes S-Class sat untouched. Roman crawled under, not disturbing the position of the door before heading to the interior door. If someone had broken in, he’d have them arrested.

Weapon out, he slowly turned the handle then nudged it open with his foot. The door chime dinged, announcing that someone was entering the house, but the alarm didn’t go off, making him tense. Disabling Vadim’s system would take skill unless someone had the security code. The utility room was also empty. Moving on silent feet, he swept through the kitchen.

A pair of high heels with . . . zombies on them sat haphazardly next to one of the island chairs in the otherwise pristine kitchen. A woman had broken in? Some gifts from the recent wedding were still unopened too. Vadim and Angel had left so quickly after their ceremony they hadn’t been able to open the gifts people had brought to the wedding.

Pausing, Roman listened intently. It sounded like running water coming from one of the bathrooms. He’d been in Vadim’s home on multiple occasions, especially back when he’d been giving Angel self-defense lessons. There were three bedrooms on the east side with the living room connecting the kitchen, dining room and library. Vadim’s office was connected off the living room, more or less a separate entity from the rest of the house.

The water had to be coming from one of the bathrooms. Since Vadim had good insulation in this place, Roman guessed it was the nearest one. Moving quickly but quietly, he made his way through the kitchen, then the living room, wondering how the hell someone got past Vadim’s security system.

As he neared the closest bedroom the sound grew louder. Bypassing it, he swept the rest of the house to find it clear before returning to the first guestroom.

The door was ajar so he slipped inside without having to move it. Empty.

His breathing and heart rate were steady. If an intruder thought they could fuck with his friends’ home while they were gone, they were in for a surprise. For a brief moment he contemplated calling the cops, but he was a former Marine and now personal security for one of the wealthiest men in the world. If he couldn’t handle one intruder, he needed a new fucking job.

Steam billowed out from the open bathroom door, but he didn’t hear the kind of change in the water’s rhythm that went along with someone showering. He frowned and gently pushed the door open.

All stone and tile that looked like sandstone, there were sparkly pieces of glass on the wall that made up the shower enclosure. The room seemed to shimmer. A shadow was behind the enclosure, but it was unmoving.

Stepping to the side, he brought his weapon fully up and swept around the shower entrance to find a naked woman slumped on the built-in bench, a bottle of vodka grasped loosely in one hand as blood trickled down her side. Long, dark hair was plastered around her face and over her shoulders and breasts.

This could be some sort of trap but he doubted it. Holstering his weapon, he stepped inside the enclosure, ignoring the pulsing jets and water splashing him as he twisted the shower knob off. Crouching in front of her, he felt the pulse point at her throat.

Leaning down, he inspected the open wound along the woman’s ribcage. If he wasn’t mistaken, that was a—the woman shifted suddenly.

Screaming, she swung the vodka bottle at him. Roman ducked and grabbed her wrist, yanking it downward. She released the bottle. It crashed to the tile floor, glass shattering.