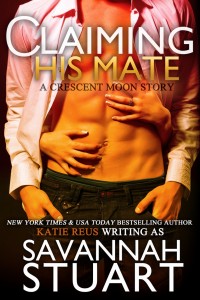 NOTE: I write under a pseudonym, Savannah Stuart. This novella is part of a series written under my alter ego.

She thought the house was empty when she broke in…

When jaguar shifter Lauren Hayes breaks into an alpha’s home to steal back what rightfully belongs to her pride, she doesn’t expect to be tackled by Max McCray, second-in-command of the Kincaid wolf pack. As punishment for her crime the sexy wolf shifter demands that she stay with him for one week. Knowing she’ll start a war between her pride and his pack if she doesn’t, she has no other choice but to agree, even if the thought of being near him 24/7 makes her scared that she won’t be able to hide her growing attraction to him.

Now he has a week to make her his…

Max has waited months to make a move on the sexy jaguar shifter and now that she’s broken shifter rules, he’s not letting her go. He doesn’t care that he’s a wolf and she’s a jaguar, claiming her forever is the only thing that matters. Unfortunately, not everyone likes the idea of him being with a feline shifter. Max is forced to choose sides between Lauren and members of the pack he’s sworn allegiance to in order to protect the woman he knows is his destined mate.

Lauren Hayes shoved a wayward strand of hair under the knit cap she wore as she slid up to the outside back wall of the quiet, two-story house. The black cover over her hair had nothing to do with the chilly October weather. Right now she was all about blending into the shadows this cold fall night. Which meant dressing in all black, like a sneaky burglar.

Because she was about to do something stupid. Incredibly stupid. She inwardly berated herself.

There was no turning back now. Shifters were notorious gossips and word had spread through the grapevine that Grant Kincaid, alpha of the Kincaid wolf pack in Gulf Shores, Alabama was on a honeymoon.

With his new human mate.

That by itself had shocked the shifter world. Kincaid’s father had been a brutal bastard—before he’d died. A shitty alpha who’d hated anyone who wasn’t supernatural. Or at least that’s what Lauren had heard.

The current alpha was two hundred years old and she was twenty-five so it wasn’t as if they’d ever run in the same circles. She’d also heard Grant wasn’t like his father and from the brief meeting she and her pride had with him six months ago, she had to agree that he seemed pretty decent.

Even if he was a stubborn ass who refused to give her family back what was rightfully theirs. Now that the alpha was out of town, she and some of her pridemates had decided to break into his house.

To steal from him.

Maybe steal was a bit of a stretch, she thought as she moved against the side of the house. Wind whipped around her, sending another shiver racing through her. She was simply taking back something that belonged to her family’s pride. She had to remind herself of that. Her sister was getting married in two weeks and the broach the elder Kincaid had taken from her family almost a hundred years ago was supposed to have been a wedding gift when the oldest Hayes daughter got married. The piece of jewelry had been in their family for centuries. Well, the jewels had been. Three, four-carat—colorless—diamonds and a handful of emeralds had been passed down from oldest daughter to oldest daughter in some form of jewelry ever since. When Lauren’s mother had received a necklace from her mother, she’d had the jewels put into a broach instead.

And Lauren desperately wanted to give it to her sister Stacia as a wedding gift. She deserved it.

Since Lauren was one of the few shifters on the planet who could mask their scent from other shifters, vampires and pretty much all supernatural beings, she’d been more or less volunteered for the job by her cousins. She also had a knack for breaking into places. Not that she was normally a thief. Her cousin Tommy, however, was. When she’d been twelve he’d taught her a lot of tricks, including picking locks and hotwiring cars. Her parents had been so pissed when they’d found out. After she stole back what was rightfully theirs, she bet they’d be glad she had those extra skills. Of course they’d be angry at her for doing this, but she’d known if she told them they would have ordered her not to. She figured it was better to do this then beg forgiveness later.

She had a few pridemates waiting a mile away in case she ran into trouble, but they had to stay out of sight unless she called them.

Right now they were all on Kincaid territory. Didn’t matter that it was a touristy beach town right on the Gulf Coast and that humans had no idea a shifter pack had carved out an area to live here. As a jaguar shifter, she knew she shouldn’t be here without permission so if she got caught she was so screwed. Wolves weren’t known for being forgiving. And stealing from an alpha? She shoved those thoughts out of her head. If she was scared, she couldn’t work.

The two story house was raised like most houses on the beach but he also had an upstairs patio that she planned to use to her full advantage. She shimmied up one of the columns with a preternatural speed and hoisted herself up and over the lattice style barrier. Being a cat, she was nimble and quick on her feet, but it still took strength to do this in human form.

Crouching low to the ground, she carefully looked around the large patio at the closed French doors and then back at the beach. The waves sounded softly about a hundred yards away, the calm methodic rhythm doing little to soothe the nerves punching through her. She was about to break into an alpha’s home. So, so, so stupid. But it would make her mother and sister happy.

Thankfully the quarter moon was hidden by clouds, further helping her cover. She’d been watching the Kincaid pack’s comings and goings for the last week in preparation for tonight. It was midnight so almost every one of them was at one of the many bars or the hotel Kincaid owned. They all worked together as a big family. Their hours were more like vampires’ than shifters’, but clearly it worked for the pack because they were ridiculously wealthy.

Owning beach front property anywhere could be pricey, but they also owned an entire condominium building next door to Kincaid’s personal residence. At least almost everyone was at work. And even though she knew for a fact they had a security system, she’d thrown a giant boulder through the back French doors a couple days ago in preparation.

Lauren had felt like a total jerk doing it, but she’d needed them to replace the doors. Which they’d done this morning. The chances of them having already replaced the security contact that would be standard with the system on the new doors was about five percent. More like zero percent considering she’d been watching the house practically ever since she’d ruined the doors. And when she hadn’t been spying, one of her pridemates had.

As she examined the French doors now she realized the lock was also new. And it wasn’t the cheap kind either. But, she was very good at getting into places she shouldn’t.

Less than sixty seconds later she was inside the master bedroom. After a quick perusal of the top part of the door frame she breathed a sigh of relief to see no new contacts in place. Carefully closing the door behind her, she paused and glanced around the giant room. With her supernatural eyesight she didn’t need to turn on a light to see everything—not that she would anyway. Might as well just put up a bright neon sign that she’d broken in.

The furniture was masculine, but there were definitely feminine touches. Not that Lauren cared about any of the décor. Now she was focused on looking for a safe. If he were going to hide diamonds and emeralds, it would definitely be in a safe. There was a slim chance he’d put it in a bank vault, but shifters and vamps, especially one as old as him, were weird about that stuff. No, they liked to keep their valuables close on hand.

For all she knew a silent alarm had gone off. There weren’t any visible sensors in the bedroom, but that didn’t mean shit. She knew that by breaking in blind without knowing the complete layout of the security system she was taking a chance but almost no one had sensors in their bedrooms. It didn’t make sense. Living room areas and downstairs areas of course, but bedrooms and any upstairs saw too much foot traffic on a daily basis.

Moving quickly and quietly she went to the most obvious place to hide a safe. The closet. Nothing there. She searched behind picture frames next, then everywhere else she could think of before moving to the next room. The door was open to reveal an office.

Pausing, she could hear only the wind and waves outside. There were residual scents in the house but that made sense. She stepped inside the room, her boots silent against the rich hardwood floor. Two steps in, she realized she wasn’t alone. It was like an abrupt assault on her senses and her inner animal simply knew.

Before she could turn fully around, she was tackled to the ground by a huge male. Definitely supernatural.

Strong, muscular arms encircled her from behind, throwing her to the ground, the male on top of her. Somehow he managed to angle their fall so he took the brunt of the impact on his arms. All the air left her lungs in a whoosh as panic slammed through her. She hadn’t heard him, hadn’t even scented him. That alone told her how dangerous he was.

Though all her animal instinct told her to fight, she knew she was at a disadvantage. Going limp, she didn’t struggle. The second she was set free or her captor loosened his grip, she was running. Wolves might be strong, but jaguars were wicked fast. In human and shifter form.

“What the hell are you doing sneaking around in wolf territory in my alpha’s fucking house?” a familiar male voice said near her ear, a trickle of his fresh scent that reminded her of the beach in winter enveloping her.

She hadn’t scented him before, probably because of her own fear and panic at doing such a stupid thing—but now his scent covered her. She shivered at the sound of Max McCray’s voice. Kincaid’s second-in-command. He was supposed to be at the Crescent Moon Bar tonight working.