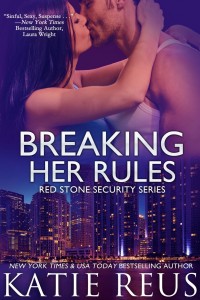 A sexy billionaire is about to stake his claim…

Iris Tarango is a small-town girl from the wrong side of the tracks; she’s also a decorated former Marine who fought hard to become one of Red Stone Security’s most respected agents. But her perfectly ordered life is turned upside down when she’s assigned to guard the sexy, dominating tycoon she shares a secret history with. The instant Iris walks back into the billionaire’s diamond-studded orbit, the wild attraction flares between them…and her reputation, objectivity, and heart are in trouble.

After an attempt on his life, business magnate Wyatt Christiansen calls in major favors to hire Iris as his bodyguard. He knows she’s the best, though he has another motive too. He sees this as his final chance to win her heart. But when danger spins out of control, all Wyatt can think of is getting Iris out of harm’s way—even if it means losing her love in the end.

Unfortunately, the killer seems to know their every move. If Wyatt and Iris don’t figure out who put out the hit, they’ll lose more than their chance at happiness together.

Iris Tarango slipped her hand into the crook of Gene Berr’s arm as they bypassed the extra security outside the already packed house party. She had more than one weapon strapped on her, as did all of the security team. The only difference between her and the rest of the team was that she was wearing a long, black formfitting dress. But strapping a blade to her thigh and a small gun to her calf was the perfect way to conceal her weapons.

She hadn’t been inside yet, but the line of cars along the winding driveway was a giveaway of the growing crowd and the security team inside had already let her know how busy it was getting. Which would just make her job that much harder.

With her two-inch heels she stood even with Berr at five foot eleven. He was a handsome, broad-shouldered, middle-aged man in good shape and for the most part she had no doubt that he could take care of himself in a one-on-one fight. There was a lot of muscle underneath the custom-made suit he was wearing and she could tell his nose had been broken more than once. She’d also read his detailed file and the man had been a boxer all through his college years.

Even if he could take care of himself, he’d hired Red Stone Security because someone had made it clear they wanted him dead. The threats had been escalating and last week his assistant had taken a bullet meant for him. Luckily the woman was going to be okay, though she was still recovering. Berr had paid for the best care, letting her heal at home instead of a sterile hospital. Berr was insistent that after his meeting tonight he be taken immediately to the woman’s home. Iris was pretty sure he felt guilty that someone close to him had been injured, but she could also tell Berr cared for his assistant way more than a boss should.

Not her business though. Tonight Iris was his shadow. Everyone but the security surrounding them would assume that she was his date for the evening. In reality she was the lead for his protective detail. If it was up to her he’d wouldn’t be at this party after such a blatant—if sloppy—attempt on his life, but apparently he couldn’t miss talking with someone important. She didn’t know the details of the meeting, just who he had the appointment with.

“No one’s going to believe you’re my date,” Berr murmured as a man wearing a tuxedo opened a large, heavy wood door into the main room of the palatial home and motioned for them to enter.

“You’re rich, of course they’ll believe it,” she said as she kept an eye on their immediate surroundings. Wealthy people could afford whatever they wanted. Sometimes whoever they wanted. Just because she was younger than him wouldn’t make most people at this party look twice. She actually wasn’t that much younger than him, maybe fifteen years, but she looked young for her age. Great genes was the only thing her mother had given her.

To their left Kell Malone and Vincent Hansen, two men she’d worked with on multiple occasions, were alert and prepared for any threats. Wearing dark suits, they blended in with the rest of this crowd. Well, sort of. She could see them for what they were. Dangerous men with a certain set of skills that would terrify most of the guests here. To their right were more men and women she trusted with her life and more importantly, the principal’s life. Protecting Berr was top priority tonight. They might be blending in, but every one of the team was on guard. As they stepped farther into the room, the team spread out into a circle surrounding her and Berr, but Iris doubted anyone else would notice the fluid movements of the team.

Berr chuckled next to her. “It’s refreshing being with someone so blunt.”

She blinked, then turned to look at him, realizing what she’d said. Sometimes she spoke without thinking. When she’d been in the Marines that hadn’t been much of a problem. Now that she was in the civilized world, she had to remember certain things. “Ah…I didn’t mean it like that. You’re handsome too…” She trailed off, realizing how lame she sounded.

But Berr just gave her a half-smile, clearly amused. “I meant that as a compliment, trust me. You remind me of…” His expression grew pained as he looked away, and Iris guessed he’d been about to say Loretta, his assistant’s name.

At least this guy wasn’t sensitive. She’d guarded enough men like that for a lifetime. Men who wanted her to stroke their ego—among other things. As if they thought that was part of her job. Fucking losers. They found out soon enough that she wasn’t just a pretty face. It was always a pleasure watching the shock on their faces when some moron thought he could lay hands on her then found himself flex-cuffed and flat on his face with her boot in his back. Her boss always warned their principals how things were done and made them sign very detailed contracts regarding their own behavior with her, but some of them never listened.

“The meeting starts in five minutes. We’re going to get you in, you’re going to take care of business, then my team is escorting you out. There will be no socializing or bullshit tonight. I refuse to put you at more risk than you already are. Understood?” Iris didn’t sugarcoat anything because it clearly wasn’t necessary with Berr. They’d already been over all this before, but she’d go over it a dozen more times if she felt it necessary. She didn’t think he would ignore her, but the last thing they needed was for anyone, including her team, to get hurt. Not only was she protecting Berr, but as team leader tonight, she considered her people her responsibility too.

“You’re the boss,” Berr said good-naturedly as they continued their slow trek across the marbled floor.

A few people nodded at Berr, but when he kept his expression stony and didn’t invite conversation, everyone stayed away. Which made her job easier. A jazz band played a slow song on the stage on the west side of the dimly lit room. A few giant chandeliers glittered prettily above them with what she guessed were real candles flickering from them. She was pretty sure the lighting was supposed to be romantic, but she didn’t like it. The brighter it was, the better she could see a potential threat. It was too dark right now. The sound of clinking glasses and laughter filled the air, various perfumes trailed around her, but she didn’t see anyone particularly threatening. Any server with a tray that got too close was smoothly cut off by Kell. The man was huge but moved with a stealth that impressed her. But if someone had managed to slip a gun past security…no, not with her team manning all the doors. It wouldn’t have happened. Still, she would never let her guard down.

“Iris, there’s a man at your six bearing down on you two. I’m intercepting.” Vincent’s voice had a deadly edge to it.

“Slow down,” Iris murmured to Berr, who immediately complied. Turning to the left so that Berr’s body was blocked from whoever was coming up on them, she swiveled and used her own body as a shield.

Then froze when she saw the man walking toward her, a determined glint in his piercing blue eyes.

What the hell was he doing here? Seeing him in the flesh after a month was a jolt to her system. She felt as if she’d been doused in ice cold water. Or punched right in the face. Somehow she found her voice. “Stand down, Vincent. Now. He’s not a threat.” Well, not to Berr. But he was a complete threat to her sanity.

She didn’t have to give any more explanation than that. Vincent stopped where he was, but his hand was close to drawing one of his concealed weapons from beneath his jacket.

Berr stiffened beside her, but then he shifted and must have seen who was walking toward them because he relaxed. “He’s fine, Iris. He’s joining in the meeting tonight. Last minute addition.”

Okay, that would have been nice to know, but she held her tongue. Mainly because she was having a damn hard time finding her voice. Her stomach tightened because of a whole mess of reasons, none of which she wanted to contemplate right now. As her pulse started to race, she bit back her anger at the affect he always had on her. Shit, shit, shit.

“Wyatt, good to see you. Thought you’d already be in the meeting by now. We’re running a bit late.” Berr held out a friendly hand to Wyatt, but the other man’s laser-like focus was all on Iris. And he was pissed. The anger rolling off him was almost palpable. “This is Iris Tarango, my date for the evening.”

Iris swallowed hard. Oh, Wyatt freaking Christiansen knew her very well. Too well. They’d grown up together, been friends for a long time, then a month ago she’d gone and done the dumbest thing ever.