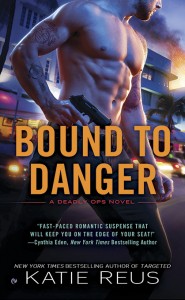 At a benefit dinner, community activist Maria Cervantes overhears two men plotting a terrorist attack that could rock Miami to its core. But before she can alert authorities, she’s almost killed in a massive explosion—and wakes up in a hospital with no memory of what happened. As the sole survivor of the attack, she is now a person of interest to the NSA—and especially to Agent Cade O’Reilly. Because Maria is the one woman Cade has never been able to forget.

Years ago, they were closer than either was willing to admit—until Cade disappeared when Maria needed him most. Now he’s sticking by her, whether she likes it or not. Because the memories locked inside her mind could hold vital clues to the next attack. Because terrorists want her dead—and because he never wants to let her go again.

It was impossible to believe that someone wanted her dead. But a couple of days ago she would have said it was impossible that someone could get away with such a horrific act of terror in her city, or that her mother would have died in a terrorist attack. When her brother had died in Afghanistan, it was one of the hardest things she’d ever had to deal with. But their family had always known that his death was a possibility. Someone didn’t go to a war zone without that knowledge. The way her mom was killed was too surreal.

And Cade was right. There was no solid reason for a terrorist to be hiding out in her hospital room other than malicious intent. “If you’re my shadow, what does that mean? I have a lot of things to take care of, including dealing with my mom’s funeral.” Her throat tightened at the thought, but at least she didn’t break down into tears again.

“Consider yourself in my protective custody. I’ll basically be your chauffer and bodyguard.” There he went again with that tone she couldn’t read. Everything about him was hard to read. He barely moved when he spoke, keeping his body rigid and under control.

The man in front of her would never be anyone’s chauffer, and something told her he would consider bodyguard duty more like babysitting. But the surprisingly subtle look he raked over her told her he didn’t exactly view being her shadow as a chore. She could tell he liked what he saw, even though he was trying not to show it. For just a brief moment, his green eyes filled with something that looked a lot like desire.

It was hard to be sure, but she’d been on the receiving end of an appreciative male look enough times to recognize it. Maria was surprised she could feel anything other than grief, but a ribbon of awareness curled through her before his gaze completely shuttered, blocking her out again.

Just as he’d cut her out of his life eight years ago.

Shoving those thoughts from her mind, she went over her options. If someone wanted her dead, being guarded by an NSA agent was smart. Not to mention that nagging feeling in her gut. She wasn’t sure what it was, but it wouldn’t go away. Maria rarely ignored her instincts. So many people did and it was often a huge mistake.

Sighing, she nodded as she pushed up from her desk. “Fine. Nash drove me here, so I need to let him know I’m leaving with you. I need to drop by my house to pick up some things before heading to my parents’ home. You can ask all the questions you want on the way. Maybe something will break through,” she muttered, frustrated with herself that such a huge block of time was missing from her memory. It was scary not to be able to remember. She also had some questions for Cade and hoped she found the courage to ask them.

“Don’t push yourself too hard,” he said softly. “Give yourself time. Your memories might come back.”

“I hope so.” The door opened before she could say anything else and Nash paused in the doorway.

His gaze zeroed in on Cade as the two men more or less sized each other up. The dislike between them was so vivid it surprised her since they hadn’t known each other before today.

“Nash, I need to go with . . . Mr. O’Reilly to answer some questions.” Saying Cade seemed too familiar somehow even if they had been friends at one time. “There’s been a . . .” She struggled to find the right words, still trying to swallow the fact that a terrorist had been in her hospital room.

Cade took care of it for her. “I’m going to be guarding Maria from this point forward. She’s of interest to the NSA and we feel she needs our protection. Nothing about her schedule will change, but I will be with her twenty-four-seven.” His expression was almost challenging as he spoke to Nash.

Her friend was no better, his glare cutting. “Of interest? What the fuck does that mean?” He stepped into the room, a foot from Cade as they faced off.

Maria didn’t feel like explaining everything to Nash right now. Not when she just wanted to get her belongings and go see her dad. He should have landed and would be home soon. Even though she was dreading going to her parents’ home, she needed to be there. Stepping between them, she placed her hand on Nash’s forearm. “Nash, just let me go with him and get these questions out of the way. If I can somehow help find who killed my mom, I’m going to.” Saying the words made her feel stronger. She might be torn up inside, but she desperately wanted to help if she could. She wanted justice for everyone who had been ruthlessly killed.

It was clear Nash wanted to argue, but he nodded tightly. “Fine. I’ve got my cell if you need me.”

Yeah, he definitely wanted to say more. He shot Cade an almost threatening look before stepping out of her office.

Both men hovered behind her, making her feel awkward as she locked up. The walk down the quiet hallways until they reached the side exit was even more awkward, the tension excruciating. The exit door automatically locked behind her. One of the volunteers or employees would have a key card to get back in if necessary, but after a certain time of day the locks were set to stay closed for the safety of everyone.

Maria kept pace with Cade, following him to a black SUV with tinted windows. Nash headed for his vehicle but waited until she and Cade pulled out of the parking lot before leaving. She also noticed that her home address was already programmed into Cade’s GPS—which told her he’d planned on her cooperation. She wasn’t sure if that should annoy her or not.

“I’m sorry, he’s just worried about me, that’s all,” Maria said into the relative quiet of the SUV. Normally she didn’t feel the need to fill silences or apologize for anyone, but she did now. After the way she’d run from the hospital—though now she was thankful she had—then Nash’s hostile behavior, she wanted to smooth things over with Cade. If they were going to be spending any amount of time together, things had to be civil.

“He’s more than just worried about you,” he said, his voice wry. “And no more Mr. O’Reilly.”

“I know, I don’t know why I called you that.” It was just as lame as she’d accused him of being in that hospital room. She shifted against the leather seat, staring out the window at the passing traffic. Dusk had fallen and the city was bright and vibrant with life. It was just another seemingly normal night in Miami, but nothing would ever be normal again. “So, what questions do you have for me?”

“Why were you at the Westwood party and how did you get there?”

She was fairly certain he already knew the response to both those questions, but she answered anyway. “Bayside Center depends on donations. So that’s the main reason I was there. And Nash, who you must know works for my parents, drove me. I was sick for days and was too weak to drive, but I needed to attend the party.”

Cade was silent for so long she turned away from the window to glance at him. He had a strong profile, a chiseled jaw that was so defined it seemed almost unreal. It was as if the man had literally been cut from stone and molded into flesh and bone. Absolute perfection. Finally he spoke, but his question surprised her. “What is Nash to you?” His voice was rough, uneven.

She frowned. “I already told you he works for my parents. Well, just my dad now.” And that knowledge cut so deep it drew blood. “But he’s my friend. Why?” Cade couldn’t think Nash was involved with anything, could he? The two men had looked at each other as if they’d wanted to rip each other to shreds.

“Were you two ever involved?”

A burst of anger erupted inside her. “Are you kidding me? How is that important?”

He shrugged in what he might have hoped was an apologetic gesture—though probably not—and shot her a hooded look as they pulled up to a stoplight. Yeah, there was nothing apologetic in his eyes. Just a simmering . . . heat. Right below the surface.

Annoyance and awareness battled inside her for dominance. Her annoyance won out. “You don’t get to ask me questions like that. Ever.” At one time he would have been justified but not now. Not when it had nothing to do with the terrorist attack.

Gritting his teeth, he turned back to the road and she forced herself to look away from his profile—and to ignore the strange butterflies in her stomach.