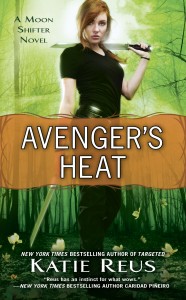 To truly have her, he must free her from her dark secret….

Enforcer Erin Flynn has dedicated her life to protecting her kind. But keeping her heart safe from Noah Campbell, the smoking-hot shifter who saved her life last year, is more difficult. The deadly beauty would love to sink into his arms and become his mate, but she knows she can’t—he must never know about her dark past.

When Erin is sent to investigate the disappearances of pregnant shifters in New Orleans, Erin and Noah find themselves involved in a mystery more sinister than anyone expected. And as Erin delves further into the crimes, chilling information about her own past is revealed. The people who wanted her dead in the first place are trying to finish the job, and Noah wants nothing more than to shield her from harm. But can Erin truly trust Noah and let him see the wounded beast she’s hidden for so long?

Noah shrugged, his expression completely unreadable. “Thanks for the razor. See you in the morning.” Then he was gone, like a damn ghost. Her door shut so quietly behind him she didn’t even hear the snick of it moving into place. What the hell? Was he messing with her?

Staring at the door, she didn’t know what to do. Or how she was supposed to feel. He’d just left and she wasn’t sure what that meant. Why hadn’t he yelled at her for leaving him?

Feeling unsettled, she stripped off the rest of her clothes, took a quick shower and brushed her teeth. But even that didn’t help. An edginess swam through her, raging and unsteady. She knew what it was.

A low growl built in her throat but she pushed it back down. After changing into purple and white polka-dotted pajama pants and a long-sleeved purple shirt, she went out into the common area. Pausing only for a moment, she marched across to his room and didn’t bother knocking. He had to be screwing with her head and she wanted to know if he was.

She found him lounging on the bed reading a book, still wearing a pair of jeans and nothing else. The quilted blue and brown comforter similar to the one in her room was thrown back so that he was stretched out on the sheets. Bright oil paintings of gas lamps and silhouettes of men playing saxophones hung above the bed but all she could focus on was Noah.

He raised an eyebrow at her, almost mocking, but she couldn’t be sure. “Everything okay?” He sounded so casual she felt a little stupid.

Instead of leaving, though everything in her being told her to, she said, “Aren’t you mad at me for leaving you? Don’t you want to yell at me or something?”

He set the paperback down on the nightstand. “Do you want me to yell at you?”

She crossed her arms over her chest. “No.”

“Then why are you here?” His face was so unreadable. Not even a hint of what he might be thinking. Normally he didn’t shut her out like this and she found it unnerving.

Erin bit her bottom lip and decided to go for honesty even though it killed her. “I don’t know. I don’t like the thought of you angry at me, and I thought you might be screwing around with me. I don’t care what most people think but . . .” She trailed off, unwilling to go down that path. She cared way too much what Noah thought and it scared her. “I’m sorry I left you and . . . I just want to make sure we’re okay.”

His expression softened a fraction. “I’m not mad. We both needed space.” His voice was soothing, the sound of it wrapping around her in a silky embrace.

“So where were you tonight? Why were you out so late?” Crap, was that jealousy in her voice?

Now something dangerous flashed in those dark eyes. It was almost predatory, but then it was gone so quickly she couldn’t be sure. “You care who I’m spending my time with?”

“No.” The answer was automatic even if it was bullshit. She cared more than she wanted to admit to herself.

He didn’t respond and she couldn’t find any words. Feeling a little pathetic, she turned to leave. Before she’d taken a step Noah had crossed the room and was in front of her, toe to toe. He moved fast.

“What do you want from me?” he asked on a soft growl.

She looked at his lips. She couldn’t help it. When he talked, she just wanted to stare at his mouth. Well, she wanted to do more than stare. How many times had she imagined that mouth on hers? On her? Just as many times as she’d told herself what a stupid idea it was. After they’d kissed not too long ago, it had been harder and harder to quell those fantasies. They’d never gotten super intimate but now that she knew what he tasted like, it was almost impossible to not do what her body practically demanded.