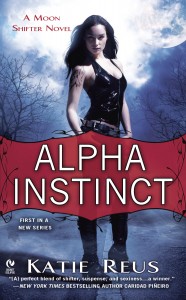 Fear has a scent…

Ana Cordona has been a strong leader for the lupine shifters who survived after all the males and most of the females in her pack were mysteriously poisoned. As tough as she is, with no Alpha male, the pack is vulnerable to the devious shifter Sean Taggart, who wants to claim both their ranch and Ana as his own. When Connor Armstrong comes back into her life, promising protection, it’s almost enough to make Ana forget how he walked out on her before—and reluctantly accept his offer to mate.

The minute Connor sees Ana again, it reawakens a raw hunger. He must have her for his bondmate—his wolf cries out for it. But his human side knows he must proceed with caution because of their complicated past. If he is to truly have her body and soul, he must go beyond his burning desire and win back her heart. Whatever it takes, he is determined not to leave her side again. But Taggart and his rival pack are not their only enemies. A human element in town is targeting shifters. Their plan not only threatens Ana and Connor’s future, but the lives of the entire pack…

The Cordona women might be small but they were lightning fast. In her shifted form she knew she could outrun him, but she’d have to get away from him first. He grabbed the zipper on her jacket and snapped it down. Adrenaline pumped through her when she realized what he intended.

She kicked at him. He deflected the blow with his thigh. His grip on her tightened for a split second, and then suddenly she was free. Taking her off guard, he shoved at her chest. She hit the ground with a thud.

Thoughts of survival overtook her. She rolled over and prepared to go through the change when he dove on top of her, pinning her to the ground. Her throat tightened as she struggled against him.

“Get off of her!” A loud, dominating male voice roared through the woods, reverberating off the trees.

Taggart shifted his weight, and she didn’t waste the opportunity. Scrambling away, she put a few yards between them. If he made one wrong move, she was going to shift and take off. Her canines were already extending. They pressed painfully against her gums. Her inner wolf begged to be unleashed.

The need to survive was taking over most of her reasoning, and the only thing keeping her from shifting was sheer willpower.

She wasn’t sure where the voice had come from, but she recognized it as sure as she knew her own name. Unless the wind was playing cruel tricks on her. She hadn’t heard that soothing voice in about fifty years. Her mouth dropped open when two men she knew and eight wolves she didn’t recognize appeared from the thickest part of the trees lining their meeting place. By the large size of the wolves it was obvious they were all part of the warrior class. Where alphas were dominant in disposition, warriors were all that and more. By nature, warriors were born fighters. It was something ingrained deep inside them, and Ana had always thought they were a bit more in touch with their inner animal than other shifters. Warriors could be intimidating, but she’d always respected them. They wanted to protect and take care of alphas and betas alike, not only because it was the pack way, but because the need to protect those weaker was in their blood.

Taggart turned and glared at her. “You think you’re so smart, you little bitch. This isn’t over.” He shifted into wolf form with the speed only an Alpha could manage and darted past her in the direction opposite the newcomers.

As she stared at the two men who’d once been her best friends, she wasn’t sure what was going on or why they were there. She truly didn’t care. All thoughts of running away dissipated.

Connor and Liam Armstrong strode toward her, of course dressed in all black. Some things hadn’t changed.

Before she could contemplate whether it was a good idea or not, she launched herself at Liam, but only because he was closest. She wrapped her arms around his neck in a tight hug. “I can’t believe you’re here.”

He returned her hug in equal measure. “Good to see you too, little wolf.” Chuckling, he finally put her down, and she paused for just a moment before wrapping her arms around Connor.

Once upon a time she’d thought she and Connor might be more than friends. Until the day he’d left her without an explanation. Even though he’d taken a little piece of her heart all those years ago, she was still grateful he was with her now.

At first he stiffened under her hold. She started to pull back when he murmured something foreign in her hair—Gaelic, maybe. She couldn’t understand his words, but that deep voice of his sent a warm ribbon of awareness curling through her. She prayed he couldn’t smell her desire. When he put her on her feet, she was speechless as she stared into his bright green eyes. He still had the ability to take her breath away without even trying.

“Did that bastard hurt you?” His words were almost devoid of emotion, but the flash of anger in his eyes gave him away. His green eyes started to turn almost black as the animal in him prepared to take over.

Though she was tempted to say yes, she shook her head and ran a light hand down his arm. The last thing she wanted was for Connor to go after Taggart. If he did, she’d bring down the wrath of Taggart’s entire pack. Considering the Cordonas had no Alpha or male protectors at the moment, she’d be signing death warrants for all her packmates. No matter how much she hated Taggart, she couldn’t risk the fallout. She didn’t know why Connor was there, but he was a nomad and once he left she’d be stuck defending her pack until she could come to an arrangement with the Council. And that was a headache she didn’t want to dwell on now. “I’m fine . . . thanks to you.”

“I should hunt him down.” This time he didn’t bother hiding the rage in his voice. Connor sounded as if he had gravel in his throat as he took a menacing step past her.

She grabbed him and squeezed. “Please don’t. It’s not worth it.”

His muscles flexed under her touch and his breathing was slightly erratic, but at least he stilled.

Looking behind them, she eyed the foreign wolves, then looked back at Connor and Liam. “What are you doing here? And who are they?”

The two men exchanged a guarded look before Connor spoke. “We heard about your pack.”

Suddenly wary, she took a step back. “What exactly have you heard?”

“That your father and your . . . mate”—he seemed to choke on the word—“were killed two months ago.”

Ana had never officially taken a mate, but she didn’t voice that aloud. There was no reason Connor needed to know. “My father and all the males of our pack were poisoned. And all the pregnant females too. My mother wasn’t pregnant, but she died anyway.” Of a broken heart, Ana was certain. It was as if her mother had just given up the will to live once her mate was gone. Even saying that out loud hurt more than Ana could describe, but she pushed past the pain. As current leader of the Cordona pack, she didn’t have time for self-pity.

“How and by whom?” he demanded.

“I don’t have answers to either of those.” Not that she hadn’t tried her damndest to find out who’d killed them. One day all of the males and the pregnant females in her pack had gotten sick, and days later they’d all been dead. Her father, two uncles and their pregnant mates, seven male cousins and their pregnant mates, and Ana’s own intended mate. And then her mother was gone too. Twenty-one members of their pack gone. Just like that. It had happened so fast. They hadn’t realized what was going on at first and by the time they did, it had been too late.

“What did our Council say?”

She snorted softly. “They’re supposed to send someone down to investigate the poisonings, but we’re apparently not very high on the food chain. Probably because we don’t have a lot of political pull now that we’re just a bunch of females.” She didn’t bother to hide the bitterness in her voice.