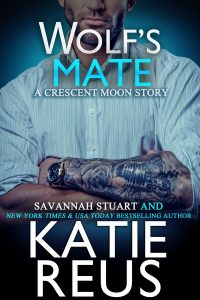 She wasn’t supposed to fall for him.

Erica’s time away from her pack was just supposed to be fun. Then she met Hudson. Instead of the no-strings attached fling, she ended up falling for him. But they’d promised each other that they’d keep things casual. Instead of risking her heart, she ran. Now she’s pregnant—and he’s determined to claim her. But the last thing she wants is to be an obligation to him.

Erica could never be a duty to Hudson, but for some reason that’s what she thinks she is. He tried to go slow, to give her space—so he wouldn’t scare her off. Now he realizes that was a mistake. It’s time for this wolf to claim his mate. Unfortunately a neighboring pack is stirring up trouble for his pack, and his she-wolf is determined to keep walls between them. Walls he intends to bring down once and for all.

Erica laid her head against Hudson’s chest as she trailed her fingers up his rock-hard abs—and over his plethora of tattoos. Everything about him was muscular and defined, which was common among shifters, wolf or otherwise. But the tattoos? He was the first shifter she’d met who had so many. Most of them were linked to his original Scottish clan or pack related things. Luckily none of them were for any past lovers. Something she would never be okay with.

She knew her time with him was coming to an end, and though she wanted to stall even longer, she shouldn’t. Not if she wanted to keep her heart in one piece. Mostly. Because it was cracking already at the thought of leaving him. Of leaving Montana.

“Keep touching me like that and I’m going to be inside you in another ten seconds,” he murmured, his voice all rough and raspy, sending shivers down her spine.

The man just had to open that sexy mouth and she was mush. “You say that like it’s a bad thing.” The truth was it didn’t matter if she was touching him, he couldn’t seem to keep his hands off her. Something she very much appreciated. Because she liked orgasms. A lot.

“Stay another couple days,” he murmured.

It was on the tip of her tongue to say yes. She desperately wanted to. One month with him wasn’t enough.

But he hadn’t offered her anything. He’d simply asked her ‘to stay in Montana’. And while he might not be alpha of the Kendrick pack, he was second-in-command and terribly alpha in nature. Shifters like him went for what they wanted. If he wanted to claim her, for her to stay permanently, he would have asked for that. Simple as that. Because the male was over two hundred years old. He was being honest, she could give him that. He’d never promised her anything and she’d taken exactly what he’d been offering—a lot of fun.

So she might want him—and genuinely want more than just sex—but she wasn’t going to throw herself at him. Hell no. She was going to walk away with her pride intact and head back to her own pack. Even if it carved her up inside to do so. Because sometime during the last month she’d fallen for him. Hard. It would have been impossible not to. He’d opened up about his past, brought her breakfast in bed—woke her up with oral sex almost every other morning—and was simply the sweetest man she’d ever met.

“We’ve been over this.” She gently nipped at his bare chest. Damn she was going to miss him. For more reasons than the hard body underneath her.

“You’re not on a schedule.” He was dangerously close to pouting, which under any other circumstance, would have made her giggle.

But she didn’t feel like laughing now. Not when the ache in her chest had settled in deep and wasn’t letting up anytime soon.

She pushed up on the bed to look into those startling blue eyes. His dark hair was a little longer than most of his packmates, curling around his ears. “I might not be on a hard schedule, but I still need to get back. It’s been a year. My pack needs me.” After college she’d started working at one of the pack’s salons. Then when the owner had up and mated—and moved—Erica had decided to reevaluate her own life.

So she’d taken a year to herself and roamed around the globe, mainly sticking to the United States. During the last month of her trip, she’d been traveling across Montana and had met the very sexy Hudson Kendrick. She’d never imagined meeting someone like him on her trip. All sexy, surly and incredibly giving in the bedroom—soooo giving. And everything about him was real and honest. What you saw with Hudson, you got.

In response, he simply growled at her, but there was no heat behind it. Not that it mattered, her wolf side knew on an intrinsic level that he would never actually hurt her so even his most terrifying growl didn’t scare her. He started to say something when his phone buzzed.

Cursing, he snatched it off the bedside table and then cursed again when he looked at the screen. “It’s my brother, we’re having another issue on the border. I’ve got to take care of this.”

Though she hated to do so, she rolled off him and let him get up. It was hard not to admire the view as he picked up his discarded jeans from the floor and tugged them on, covering all of that sexy bronze skin.

“I’m probably just going to head out while you’re gone,” she said carefully, watching him for his reaction.

He froze for a moment before turning to glare at her. “At least wait until I can take you to the airport.”

She wanted to say yes but gave a noncommittal grunt. His brother, the alpha, had offered to fly her back to her home in Alabama on his private jet anytime she wanted. Apparently, there was a pilot currently on standby. Which was really nice, but also bad because she’d kept extending her stay for the last week. Because Hudson kept pushing for ‘one more day’. Erica knew that if she waited for him to take her to the airport, she’d give him another day, and then another.

And then that whole pride thing? Yeah, she wasn’t so sure she’d walk away with it intact. She’d do something stupid and then getting over him would be even harder.