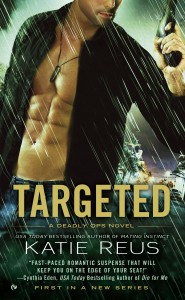 Former Marine sniper and current NSA agent Jack Stone has a new face to go with his new identity. But he still has the same tortured memories—which include the woman he let get away years ago, when they were teenagers. Now his new assignment in Miami will put him so close to the woman he’s never been able to forget, he could reach out and touch her—if only she weren’t under suspicion.

When Sophie Moreno uncovers evidence linking the medical supply company she works for with arms smuggling—and worse—she doesn’t know who to turn to. After a shocking betrayal, she realizes the only person she can trust is a mysterious new person in the company—a man with hauntingly familiar eyes.

As Sophie questions her intense attraction to this man and Jack struggles not to blow his cover, the two of them must race against the clock to stop terrorists from killing scores of people—starting with them.

Almost against her will, Sophie’s eyes trailed over him. The man seemed to make the room shrink just by stepping inside. It wasn’t that he was overly tall. He was maybe six feet, but he had a strong, domineering . . . presence. His shoulders almost appeared to strain against his suit, as if he’d be more comfortable chopping lumber or something else equally and ridiculously masculine. When the sudden—unexpected and definitely absurd—thought of what it might feel like to have those strong arms around her popped into her head, she felt herself blushing furiously. This visceral reaction was too weird and brought up too many unwanted memories. When she focused on his face once again, her heart skipped a beat. “Holy shit.”

The man jerked to a halt and she realized she’d said the words out loud. She cringed and ordered herself to get it together.

“Ah . . . sorry.” What else could she say, that she’d suddenly developed a mild case of Tourette’s?

“Sophie, this is Jack Baldwin. He’s been a silent partner with Keane Flight until recently.” Ronald’s words blew right past her as she continued to watch the stranger.

He had pale bluish gray eyes she’d never seen on anyone before except . . . Sam. Eyes with the seemingly endless depth of the unforgiving ocean. So deep she could drown in them. She wanted to look away, but couldn’t even pretend not to stare. And he was definitely looking back. Watching her with a mix of curiosity and something she couldn’t begin to define.

The harsh lines and angles of his face gave him a unique, almost statuesque quality. As if he’d been carved out of stone. He wasn’t handsome in the typical Hollywood sense, but any woman with a pulse would certainly do a double take. Maybe even a triple take. He even had the same dark hair as Sam. For a brief moment she could feel herself drowning as memories attacked her.

Sam carrying her books home from school. Protecting her from neighborhood bullies. Staying up late with her when she needed help studying. Sam kissing her, making love to her, going with her to the beach even though he hated it, holding her when she’d had a bad day.

Sam is dead. The jarring thought was the only thing that gave her the power to tear away from this stranger’s far-too-intimate gaze. Feeling an ache deep inside, she absently rubbed the middle of her chest until she realized what she was doing. She nervously cleared her throat and hoped her blush had started to recede as she found her voice. Right now Keane was at the top of her shit list. She wasn’t going to let a handsome face distract her. “Recently?”