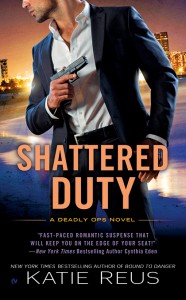 When his wife was murdered two years ago, Special Agent Levi Lazaro turned his back on everything he cared about. Ever since, he has thought of nothing but vengeance. Now he’s finally uncovered the identities of those who killed his wife—and he’s ready to destroy them at any cost. He won’t let anything stand in his way—not even a beautiful NSA agent on a mission of her own.

Special Agent Selene Wolfe prides herself on being the best. Her fearlessness and quick-thinking make her the perfect person to take down a deadly terrorist cell. But she needs Levi’s help, and the moment he shows up, Selene knows her objectivity—and her heart—are in trouble.

As the two strike an uneasy alliance, Levi finds himself tormented by his desire for Selene—a feeling he thought long dead. But when their mission takes an unexpected turn, he finds himself faced with an impossible choice: either put aside his need for revenge, or save the woman who’s reawakened his soul…

“Alexander’s there,” Allison said, a strange note in her voice.

He followed her line of sight and spotted Alexander striding outside with a woman on his arm. They were about fifteen feet away, in one of the open glass doorways.

But she wasn’t arm candy. This woman wasn’t some piece of fluff. Tall, sleek, strong, she was an operator. No doubt about it, just from the way she moved. She scanned the enormous pool area, looking at faces and taking mental notes. He could see it in every tight line of that hot body.

She was drop-dead gorgeous, though that description fell way too short of reality. She had to be at least five feet ten, but it was hard to tell with her heels. Her white blond hair had been pulled into a twist type of thing, falling over one of her breasts like a long rope. Her dark blue dress was long and fitted but not skintight and the asymmetrical one-shoulder look was sexy as hell. Since when had shoulders become sexy? The dress accentuated all her curves, making his mouth water. The reaction stunned him as much as it pissed him off. Unlike practically everyone here tonight wearing black her dress was blue. He wondered if it matched her eyes. Immediately he hated himself for his curiosity. He didn’t give a shit about some woman Alexander had arrived with.

Then she turned fully toward him and all the breath left his lungs in one whoosh as their gazes collided. Something flared in her pale blue eyes. Something he couldn’t read as she looked him over from head to toe, unabashed in her perusal. He couldn’t tell if she was checking him out with sexual interest or sizing him up. Did she know who he was? Truly was . . . He wasn’t sure why the thought crossed his mind. He didn’t know all of Wesley’s operators but this woman was looking at him as if she knew him. Or maybe she just wanted to get to know him. Hell if he knew. It’d been too long since he’d paid attention to a woman and he hated that he couldn’t tell if that was feminine interest in her gaze.

And now, after two years, his cock decided wake up.

Striding forward he practically dragged Allison with him, ignoring her little yelp of surprise as he barreled toward them. By the time he’d reached Alexander and the woman, Alexander had pulled two champagne glasses from one of the passing server’s trays.

The arms dealer’s eyes widened a fraction as he turned to find Levi and Allison standing there. He completely ignored Levi and his date and smiled at Allison. He held out a glass to her, a hell of a lot more polite than Levi had been tonight. “I didn’t know you’d be here,” Alexander said, clearly pleased to see her.

“Thank you,” she murmured, taking it. “I like the beard. It suits you.”

“I remember what you said and thought I’d try it,” Alexander said, staring at Allison as if mesmerized. The blonde was still watching Levi.

Gritting his teeth, Levi cleared his throat. “Allison, you already know Alexander.” He turned to the man’s date then. “But we haven’t met.”

The blonde continued to watch him curiously as Alexander handed her the other glass. “Of course. Selene, this is Isaiah Moore, an associate. And this is the lovely Allison.”

The blonde nodded politely at Allison, then turned that pale gaze on Levi. “Isaiah?” Her voice was throaty, sexy, and sent another pulse of need to his cock. She seemed almost amused by his name. As if she didn’t believe it. And fuck it, he wanted to hear his real name on those lips.