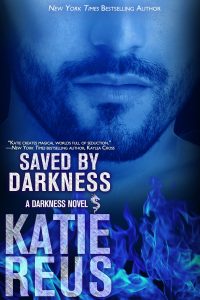 He thought he lost her decades ago.

Half-demon, half-dragon shifter Ian McCabe is hellbent on getting back the only woman he’s ever loved. When Fiona O’Riley kicked him out of her life decades ago, he thought she was gone for good. Now that she’s back, nothing will stop him from claiming her. But she wants nothing to do with him—or his family.

She’ll do anything to save him.

Fiona knows that Ian is the only male for her. The only way to keep him alive is to stay away from him. But when tragedy strikes and they discover a wicked agenda for the mass murder of humans, they must work together to take down the enemies that threaten everyone. But there’s so much more on the line. As their undeniable desire intensifies, they’re faced with an unbearable choice.  If Fiona and Ian succumb to their temptation, mating could be the last thing they ever do.

Inside the club, Ian immediately scanned the main bar, saw his half-sister Cynara bartending. She smiled at him, flashing her fangs before returning to her customers.

Muted music filtered in from well-hidden speakers. Half the roped-off booths across the main dance floor already had the heavy curtains closed, giving the supernaturals inside privacy. There were no windows anywhere in the two-story building in case nosy humans stumbled on the property.

The scent of sweat and sex filled the air, intermingling with the various perfumes. Men and women were on the half-dozen platforms, dancing and groping each other. Instead of moving through the throng of high-top tables near the bar, he skirted the edge of the club and only stopped when he reached a plain white door.

It was unlocked, no doubt because Malloy had let Rory know he was here already. Once he was in the hallway, the music dimmed even more thanks to incredible soundproofing.

The door to Bo’s office was already open, and inside he found Liberty sitting on Rory’s lap on a chair in front of the desk, curled into him like she belonged there. Which she did.

Seeing them together and happily mated made him smile. His brother deserved a sweet female like her, someone who made him happy and who would do anything for him.

The blond female smiled when she saw him, but didn’t move from Rory’s lap. Rory didn’t make a move to get up either. Since they had different mothers there weren’t as many familial markers between them—at least in human form. They both had darker hair, but Rory had a slight Scottish accent whereas Ian had a faint Irish one. And Rory’s eyes were green, or “mossy green” as Liberty had once told him. Whatever the hell that meant.

“Not really.” Biloxi could be busy, especially around five o’clock, but it hadn’t been worse than normal. Probably because things had slowed down after Christmas. People were tired of shopping and wanted to relax. Ian sat on the chair closest to them and propped his feet up on the desk. “So what’s up?”

At his question Liberty shifted nervously in Rory’s lap before pushing to her feet. She moved to one of the bookshelves in the small office and started straightening books that didn’t need straightening. The female was mostly human and young by their standards. In her twenties, she’d been through the worst kind of hell so age didn’t really matter versus her shitty life experience. He respected the hell out of her for all she’d survived. She didn’t do well hiding her emotions, however.

Rory’s body tensed slightly as he leaned forward. “Finn came to me with something right before Christmas. I didn’t want to ruin the holidays, so…” He cleared his throat, looking nervous, which was out of character for his brother.

Ian and Rory had discovered each other decades ago and lived in a Hell realm for most of that time. There was no one he was closer to. His brother’s tension agitated Ian’s demon side. “Just say it.”

He stared at the picture, feeling his entire body heat up. It had been years since he’d seen her. He had a picture of Fiona, but it was from decades ago and it was in one of his safes—along with other treasures. That was not a myth about dragons—they loved treasure. Given her modern style of dress, this was taken fairly recently. “What is this?” His voice was always raspy, but even more so now.

Rory flicked a glance at Liberty before looking back at Ian. “This is what I wanted to talk to you about. Finn wants to speak to this female. She lives on the outskirts of his territory. Not in it, but close enough. And we needed to know if she is a trustworthy female. I know you know who she is, but I don’t know the nature of your relationship.” He stared at Ian questioningly.

Ian stood abruptly. He’d shared almost every part of his life and history with Rory. Fiona was the only thing he’d left out of that narrative. He simply couldn’t talk about her. It hurt too bad. Made his dragon want to take over, to burn everything and everyone to ash. “She’s trustworthy.” Without saying anything further he strode from the room. He heard his brother curse softly behind him, but ignored him.

Rory was lucky he hadn’t burned a hole in the ceiling and just flown out of there. Which yes, was insane, but Ian wasn’t in control now. He needed to get to the Stavros estate as soon as possible. The Alpha wolf who ran this territory wouldn’t be happy to see him since he didn’t plan to call first, but the male could just deal with it. Seeing Fiona’s picture again had his most primal nature clawing to the surface.

He couldn’t even convince himself that he’d buried memories of her because it was a lie. He thought of her every damn day. The woman lived inside him, was his mate. It didn’t matter that they’d never crossed that final line and mated. That he’d never marked her—that she was mated to another. Another female would never do for him. Now to know that she was somehow nearby, close to Finn’s territory… He was going to find out everything from the Alpha.

Then he was going to see her. He knew he shouldn’t. She was mated, taken. She’d broken his heart into a thousand shards and gone off with another male. Another male her family deemed worthy. Too late he realized she’d done it to protect him, that she’d sacrificed her own happiness to keep him alive. Or it had been an attempt to—but he didn’t need anyone’s protection. He would have kept them safe, alive. He just wished she’d known that, trusted him enough.

Now there was no logical reason to go to her. Still, he would see her. He had to.