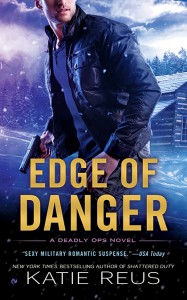 When an assassin tries to kill undercover DEA agent Tucker Pankov the same week his boss is taken out, Tucker has good reason to be paranoid. And when other members of his elite team are not only targeted, but stripped of top-secret security clearance, Tucker has one shot at discovering who wants them dead—and why. So he kidnaps the only woman he thinks can save them.

Brilliant NSA analyst Karen Stafford doesn’t like being forced into anything, especially by someone she doesn’t trust. Yet after a hijacked US-owned drone starts attacking government installations resulting in mass casualties, Karen has to take Tucker’s side.  Now, two unlikely allies must unite to prevent an escalating and unthinkable terrorist conspiracy. But as Tucker and Karen grow intimate, they realize the conspiracy runs deep, and their enemies are closer than anyone realized.

“I’m really sorry about this,” the blond muttered as he motioned her up a short set of stone steps. “The others are checking the perimeter to make sure we’re still secure. Then we’re going to sit down and just talk. I’m really sorry we had to take you the way we did, but you’ll understand once we lay everything out.” The man actually sounded sincere as he opened the front door and stepped inside with her.

She resisted the urge to snort. Liar, liar. Instead of saying what she wanted to, she gave a half smile. “I really have to, uh . . . use the bathroom if that’s okay.” Despite the instinctive urge to attempt bolting right then and there, she reined it in. It would be foolish and she knew she wouldn’t get far. She had to be smart.

“Oh, right. Ah . . .” He shut the door behind them and led her through a living room with a modern country feel to it. No personal items like photos anywhere.

He led her to a small room with two windows that was clearly used as an office. There was a futon in it with a blue-and-green-plaid quilt draped over it. There was also a masculine desk with a laptop set up on it and a few framed pictures of nature settings on the walls. No personal photos in this room either. Maybe it was a safe house of sorts. Or where they brought people to torture and kill. Ugh.

The blond started to open one door, which turned out to be a closet, then shook his head and opened another right next to it. The way he did it made her think he hadn’t been here often. She filed that away. “This is the bathroom. I’ll be right outside.” He pulled out a switchblade and before she had a chance to reel back, he expertly cut her flex cuffs free before quickly closing the blade and putting the knife away.

The way he handled the thing made it clear he was comfortable with knives. Exceptionally so. He crossed his arms over his chest and leaned against the doorframe, watching her carefully.

She didn’t say anything, just shut the door behind her and let out a ragged sigh. But she didn’t waste time. As quietly as possible she pulled back the shower curtain just a bit. No window, not even a small one. Damn it. No wonder he was letting her in here alone. Since she actually had to pee, she quickly relieved herself, then scanned the medicine cabinet for a weapon. Nothing. Not even hair spray or something aerosol she could use.

That icy fear set in stronger now, slithering through her veins. This was truly happening. The only thing she could do was try to take on the blond guy. It was stupid, she knew, but one against one was better than one against four.

Taking a deep breath, she’d started to open the bathroom door when she heard the guy murmur something. Not to her, though. He continued talking and his voice grew fainter along with the sound of boots stepping away.

He was leaving his protective duty.

That stupid shred of hope bloomed inside her. She had a desperate, likely-to-fail plan, but she had to try. She refused to just give up.

Turning on the faucet, she let the water run and stepped out of the bathroom. He wasn’t there. She wanted to peek out the doorway into the hallway but decided against it. Seconds would matter right now. Moving quickly to one of the windows by the futon, she slid the locks free and pushed it open just wide enough for her to climb through.

Instead of doing that, she moved back to the closet and ducked inside. Blood rushed in her ears as she heard boot steps nearby, then a vicious curse.

“I was only gone a second,” the blond said.

“She went out the fucking window,” one of the other guys snapped. “Call Tucker. I’m heading after her.”

She didn’t have time to contemplate who Tucker was, but she filed the name away. She heard muffled movement as someone climbed out the window. The bathroom door opened and someone turned off the faucet. More boot steps, then a door nearby slamming. Maybe the front door.

Though her hands shook, she knew she couldn’t hide here forever. They’d figure out what she’d done eventually, and she needed to be gone before then. With a damp palm she opened the door and peeked out.

The curtains rippled in the breeze, but the room was empty. Heart pounding, she hurried out of the closet and into the hallway. Her analytical side told her to find a phone or weapon, but the most primal part of her said she had to escape now. She had to get free, to find help.

Instead of heading to the front door, she raced down the hallway to what turned out to be a huge bedroom.

After peeking out one of the windows and finding the coast clear, she opened it and jumped out. Her sneakers sank into the snow. Hating that she’d leave a trail, there was no avoiding it so she raced toward the nearest line of trees. They’d see which direction she’d gone, but she had a small head start. It was all she could ask for at this point.

Her breath sawed in and out of her lungs as she headed faster toward the woods, uncaring of the noise she made. The next step was finding help. Maybe a neighbor or a road where she could flag someone down. Because she wasn’t letting these bastards get her.

No way in hell.