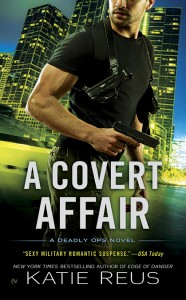 After being wounded in action, NSA agent Nathan Ortiz comes home to Miami, eager to return to duty. But he doesn’t expect his newest mission to lead him straight to the one woman he loved, lost, and has never gotten over.

A beautiful, successful restaurateur, Amelia Rios enjoys giving back to her community, especially to struggling women. Then a woman she recently hired stops showing up for work, and, unfortunately, she isn’t the first to go missing.

Soon Amelia finds herself thrust into a shadowy, dark world, working side by side with Nathan, the only man she’s ever loved. They must confront old feelings as they battle a ruthless enemy preying on the poor and weak. The heat simmering between Nathan and Amelia could mean a second chance for them—but first they have to survive.

“I’d like you to meet an associate of mine,” Iker murmured, slipping his arm around her waist in the same way he’d done with Naomi, only this time his grip was tighter, less casual. Definitely a male-territorial thing, if she had to guess.

When she turned in his arm, looking up to meet his associate, she shouldn’t have been surprised to see Nathan. But the shock of seeing him up close was a punch to her senses. Blood rushed to her face and she inwardly cursed her reaction.

“Amelia, this is Miguel Ortiz.”

Miguel? Nathan’s eyes were the same dark espresso she remembered. She didn’t know what to make of the name Miguel but didn’t comment on that. If he was using another name, she figured he didn’t want to admit they knew each other. So she didn’t acknowledge that she knew him, instead smiling politely as she held out a hand.

He took it, shook her hand almost stiffly, formally. It was weird touching him again after so long. Just feeling his skin against her brought up far too many memories. Ones that should stay buried. The man had always been so talented with his fingers and mouth. So, so talented. Something she shouldn’t be thinking about.

“A pleasure to meet you.” His words were raspy, but it was clear he didn’t plan to acknowledge her either. Okay, so he was definitely using an alias.

She’d be lying if she said she wasn’t curious why. No matter what, she certainly wasn’t going to call him out in front of anyone else. She swallowed hard, forcing her throat to work. “You too.” Two words—she was a freaking rock star. She swallowed again, this time subtly. “Are you in antiquities too?” she asked, looking between the two men, thankful that she seemed to have herself under control.

Nathan looked at Iker, something dark in his gaze. “Something like that.”

She wasn’t sure what passed between them, but Iker seemed annoyed. He was still all charm, but something had shifted.

“Would it offend you if I asked your date for a dance?” Nathan asked, his gaze perfectly placid and polite. But there was something in his eyes she couldn’t get a handle on.

“I don’t speak for Amelia.” Iker’s voice was butter smooth.

Now Nathan turned that laserlike focus on her again. “Will you dance with me?”

A soft Cuban beat filled the air as the lights dimmed a fraction. “Uh . . .” She glanced at Iker. She didn’t want to be rude and they’d both already danced with other people earlier in the evening. Still, it felt as if it might be impolite to say yes, but she really wanted to talk to Nathan—or Miguel—and ask why he was using another name and why he was in Miami. For a brief moment she wondered if he was in some sort of criminal business, but almost immediately she discarded that idea. The Nathan she’d known had seen the world in black and white; he’d been so damn honorable about everything. Since she wasn’t going to find out by guessing, she let her curiosity win. “Do you mind?”

Iker’s expression was soft as he shook his head. “No, but save the next one for me.” Surprising her, he kissed her forehead in a sweet gesture.

Before she could react or think, Nathan took her hand and she found herself in his arms. She was glad she’d worn heels so she was better matched for him, height-wise. He was six feet tall, the same as Iker. But Nathan’s presence was somehow bigger, more intense. Of course that was probably just to her, not the entire room.

As one of his big hands landed on her hip, more of those stupid memories pushed themselves up, including the one of her at his school’s prom. It had been so damn cliché, but they’d lost their virginity to each other after the prom. It was a sweet memory, one she’d always cherished. Despite the surreal quality of the situation, she wanted to lean into him, to soak up all of him. It had been so long since she saw him, since she ended things with him in the worst way possible, and it was difficult to believe he was here. She still felt guilty about the way she’d cut him out of her life so abruptly.

“The beard’s new,” she murmured as they swayed with what could have been a practiced rhythm. It seemed that years of separation didn’t affect that. Their movements might as well have been choreographed.

To her surprise, the hint of a smile played across those full lips. “How long have you been with Iker Mercado?”

“I don’t answer your questions, Miguel, until you tell me why you’re calling yourself—”

The grip on her hip tightened, a clear indication for silence, before he gently spun her in time with the steady beat. She was incredibly grateful for the simple three-step dance pattern. Unlike some of the complicated dances from earlier in the evening, this one she could do without thinking. Which was good because way too many questions invaded her mind. He was obviously being secretive for a reason, and she wanted to know why. Her mind circled back to the criminal angle, but she couldn’t make that work in her head. It just didn’t fit. Still, twelve years had passed. People changed.